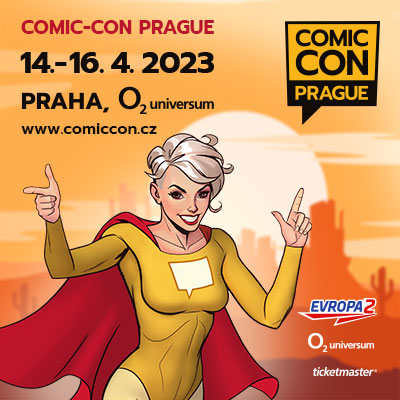 Ticket sales have not yet begun

The fourth edition of the Comic-Con Prague pop culture festival will take place from 14 to 16 April 2023 at the O2 universe in Prague. The organisers have revealed the first names of the star guests, world-famous actors Danny Glover and Brian Cox. Tickets can be purchased at a discounted price until the end of the year.

Star guests
“At this moment I can confirm that world-famous actors Danny Glover and Brian Cox are coming to the fourth edition of Comic-Con Prague. We are negotiating with other Hollywood stars and will publish their names gradually. From the comic creators we have confirmed Jason Aaron,” says Pavel Renčín, marketing director of Active Radio, on behalf of the organisers. American actor and producer Danny Glover is known to fans primarily for his role as Detective Roger Murtaugh in the cult action film series Lethal Weapon. He can also be seen in the films Escape from Alcatraz, The Color Purple and Predator. Scottish actor Brian Cox won a Golden Globe Award for his role as media mogul Logan Roy in the acclaimed TV series The Disruption. He has also starred in Braveheart, X-Men 2, Rise of the Planet of the Apes, Red Dragon, The Bourne Identity and The Bourne Supremacy, among others. American screenwriter Jason Aaron became famous for his original comic books Scalped and Southern Bastards, which subsequently earned him work on superhero comics from DC and Marvel such as Thor, Doctor Strange and Wolverine.

A packed schedule
In April next year, Prague will experience for the fourth time a feast for fans of comics, sci-fi, fantasy and computer games – Comic-Con Prague. Visitors can look forward not only to photography, autograph sessions and discussions with foreign and local actors and artists, but also to screenings, workshops, competitions, exhibitions, concerts and video and board games. Fan and professional merch associated with popular franchises will also be available for purchase on site. “We are preparing a rich fan program in cooperation with the community known from other Czech cons. The programme lines will be dedicated to phenomena such as Game of Thrones, Harry Potter, Star Trek, Star Wars, Red Dwarf, manga, anime and others,” adds Václav Pravda, the festival’s programme director.

Christmas gift tip
Until the end of the year, it is possible to buy tickets for Comic-Con Prague in the Ticketmaster network at a discounted price. In addition to the classic tickets, there are also special collector and VIP tickets on offer.