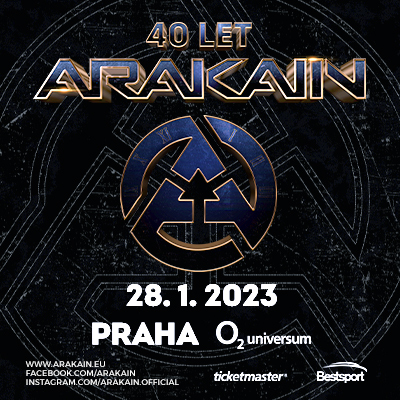 The most successful Czech metal legend ARAKAIN will celebrate the 40th anniversary of its existence on the music scene throughout 2022. In the spring the band will start a series of solo concerts in the Czech Republic, in the summer will take part in a number of festivals, festivities and the whole campaign will end with an annual concert on January 28, 2023 at the O2 universum in Prague.

“Arakain will commemorate the incredible 40th anniversary of its creation with a series of concerts with a repertoire from all of history, so that we can recapitulate the biggest hits of our era with the fans. The highlight of the festive year will be the largest mega concert in history with the participation of former singers at the O2 universum in Prague. This will close this festive year and, if the metal God gives, will send Arakain to the fifth decade of his existence,” invites guitarist and co-founder Jiří Urban on behalf of the entire band.

ARAKAIN is a legend in domestic culture and a guarantee of a high standard. In his genre, he is a 100% legend not only in quality, but also in the length of his work on the Czech rock scene.