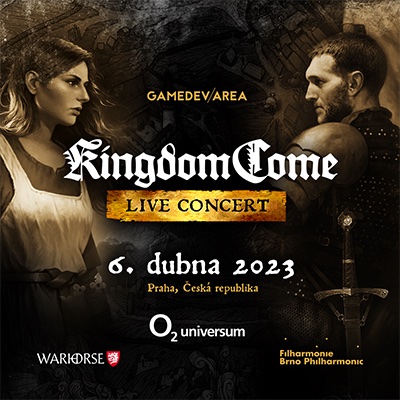 LORD OF THE RINGS

The O2 universum will soon dominate the atmosphere of the Middle Ages. Musically, the idyll of Czech villages, church chants, the grandeur of castles and the blood and dirt of cruel wars come to life here. All this in the form of the soundtrack of one of the most successful Czech games, Kingdom Come: Deliverance.

With more than 4 million units sold, Kingdom Come: Deliverance is one of the most successful Czech games ever. The work from the Warhorse studio, founded by veterans of the gaming industry Daniel Vávra and Martin Klíma, still receives many positive reactions from reviewers and the active gaming community. The game also has several awards, such as the Game of the Year 2017 from the prestigious Gamescom festival or the award for the best game design from the Czech Game of the Year event.

The game achieved these successes mainly due to the strong emphasis on the realistic depiction of the Czech lands in the 15th century, specifically the period shortly after the invasion of Sigismund of Luxembourg. In the spirit of realism, the game also represents the social conditions and fighting style of the time, which does not foreshadow the easy way for the player and his main character, a simple boy from a village without noble background or knightly training.
The player is accompanied in this way by a beautiful period soundtrack by composers Jan Valta and Adam Sporka. Gregorian chants, pub songs and war drums in the game sound according to the principle of so-called adaptive music. In practice, this means that the individual audio tracks are divided into several parts. They are able to move smoothly into each other, thus responding to changes in the game situation without the player hearing noticeably that one song “ends” and the other “begins”. This creates a dynamic and intense gaming experience, which undoubtedly played a significant role in the success of the game.

Fans will be able to enjoy this unforgettable medieval atmosphere live in the form of a magnificent musical performance under the roof of the O2 Universe, which will take place on April 6, 2023.

Tickets for the original date of 5 February 2022 remain valid for the new date of 6 April 2023 and do not need to be exchanged.

The orchestral part of the performance will be performed by the Brno Philharmonic Orchestra under the baton of Jan Valta. Vocally accompanying the orchestra will be the talented Masaryk University Choir. The experience will then be complemented by four troubadours from the Bakchus formation, which, in collaboration with Adam Sporka, recorded medieval songs that are played in the play. The concert will take place in the spirit of the mentioned method of adaptive music, and therefore the performance will be accompanied by an audiovisual track with key scenes from the play. So fans of the game and medieval music really have something to look forward to.

The theme of video games is definitely no stranger to the Brno Philharmonic, which has already been done by several concerts with music from the legendary game series Mafia. The last time fans of the series met in Brno’s Špilberk, where the concert was performed by actor Marek Vašut. He dubbed the main character of the first part of the series and repeated his role in a recent reworking called Mafia: Definitive Edition.

The concerts of the soundtracks of both games are organized by the GameDev Area initiative, which already has several events of a similar format. Thanks to her, the Polish band Percival, for example, visited Brno and took part in the soundtrack to the world-famous game The Sorcerer 3 and prepared a spectacular Wild Hunt Live show for its fans.